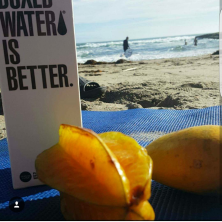 Mangos, cucumbers, bananas! That’s all I craved during my pregnancy. For those short months I couldn’t stomach any meat or animal products. The smell was torturous! After my pregnancy had ended I attempted to introduce meat back into my diet. I enjoyed it, but the taste wasn’t the same as before. I began doing some reading and watching some documentaries. In my reading I saw that a lot of women who had lost a baby had a change in their taste buds. Some able to enjoy foods they never had before. My countless hours of reading and educating myself lead me down a rabbit whole of vegan videos and blogs. I knew that this was the life for me!

When I was younger I would gag on steak and pork chops. I loved my fruits and vegetables. I wasn’t a normal child. We had a tradition at my grandparents’ house, at night we would have “snack”. It was basically a late night desert before bed. I would always attempt to eat the same thing as my cousin, a banana split. It wasn’t until my Nana saw me only eating the banana that she started just handing me one for snack with a grin. How strange I thought to myself….how strange must she think I am for not wanting ice cream, for choosing a banana over that. I did enjoy my chicken and fish as a child and young adult. It wasn’t until I started dating my first serious boyfriend and going to dinner at his house did I start to eat meat on daily basis. I felt as if I was offending his family  by refusing the meals they had prepared for me. My body began to change from all the meat intake along with my appearance. I felt tired, my mood had decreased, and I gained weight.

I’m happy to announce I have been vegan for over a month now with no mess ups. It was easier for me then I think it would be for a normal person. I wear my emotions on my sleeve so watching videos like Earthlings and Cowspiracy really put the nail in the coffin for me. I have found amazing recipes from watching Hot For Food, Lauren Toyota, and the Edgy Veg on YouTube. I don’t ever feel like I’m missing out on something.

I have noticed some great changes since becoming vegan. I have lost weight, I feel more energized, and my skin is glowing. I had been having some serious acne problems and since this lifestyle change I am noticing a huge improvement with my complexion. Also my hair is growing at a better rate. It feels stronger. I stopped taking my depression medication, I’m not recommending anyone do this without seeking a medical opinion. I have been much happier and on the days that I’m feeling weak I have developed a nice self-care routine. I haven’t had any negative compliments about this change yet.

This is just another step forward in my spiritual journey.  I love animals, the planet, and have always wanted to make a difference. It’s nice to know that by doing this I am impacting the world in a positive way. I have inspired my boyfriend to not eat meat anymore as well, even though he does enjoy his liquid cheese. He has transitioned into being a vegetarian. I’m hoping by the end of the year I can convince him to be purely plant based.

Some tips I would recommend if you decide to try a vegan or plant based diet go as follows:

1)      Start slow! Don’t just jump into in. Do some research! I slowly decreased my meat and animal product intake.

2)      Decide why! I decided I was tired of talking about how I wanted to change the world and decided to do it! On days that I feel like a mcdouble I watch a little segment of Earthlings, The way they treat the animals helps me stay grounded in this  life style change.

3)      Find what you like! I started watching videos and creating stuff in the kitchen The first couple weeks I spent a lot of money just trying to figure out what  liked and what I didn’t. I stopped being afraid of making a food item I might not like. I just started experimenting.

4)      Bargain shop! A lot of the fruits and vegetables I eat come from my friends and families gardens. It’s always nice to get something home grown and free before going grocery shopping and forking out money for something. Craigslist has a plethora of farmers just waiting for someone to volunteer to come pick their fruit for them. I found a local man who allows people to come pick his plums for free. Also just making a quick post on craigslist ii got some fruits and veggies.

5)      Freeze! If store is having a sale on something stock up on it! Freeze it and you can use it for smoothies or juices later.

6)      Don’t take on the world! Right now I am just focusing on the foods and condiments I intake. Later, after a year I will start paying closer attention to the clothes, cleaning products, and beauty products I use as well.

7)      Don’t be afraid to tell your friends and family. It’s helpful that they know that way during family events they consider you when preparing the meals. Maybe they will buy earth balance butter and almond milk and use that for the mashed potatoes instead of the animal based products.

8)      Prepare! When I know there is an event coming up I make sure to find some recipes similar to the ones that might be consumed at the event so I don’t feel so different. I make sure to bring my own food so I am set up for success.

9)      Invest in a high speed blender and a nut bag! I got a ninja blender for 200 dollars and a couple nut bags on amazing for 13 dollars. Every morning I blend my fruits and veggies and strain them in the bag. Perfect juice without having to hassle with a juicer! Also blenders are good of vegan cheese and sauces.

10)  Have fun with it! Experiment, research, and don’t take yourself so seriously. I don’t judge others on the food they have on their plates, I just focus on myself. You aren’t better than anyone just because of the foods you are now deciding to eat.

I’m hoping that sometime in July I will start vlogging, maybe doing recipe videos as well. I would love to really give you guys a in depth look into this crazy journey I’ve been on. This spiritual quest has had so many ups and downs, but that’s life isn’t it. Things don’t work out as perfect as you envision them, and if they did how dull and boring would that be. I am grateful for every experience I have had to endure, because without it I wouldn’t be me.